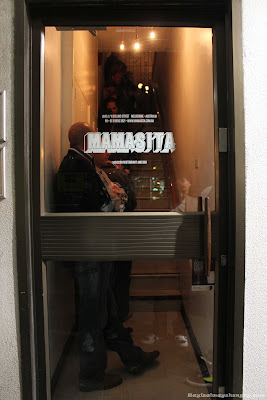 Recently, Mamasita has been the talk of the town. Never tasted good Mexican food before, so would really like to try it out. The place was hard to spot but what made it easy was the queue outside. As they don't allow phone call reservations, I had to queue up to make reservation. Looking at the queue it brought up my expectation and I was hoping the 30 minutes wait was worth it.


I wasn't allowed to take pictures of the restaurant so the only way I could describe the place is by words. The restaurant has low lights with a cafe and bar-like ambiance. Hardwood tables with high stools. Consistent funky music.
Initially, we had two Habanero Chili bottles starting from the left. As we were having fun trying to decide which was the spiciest, we decided to get the spiciest one as well. It was really spicy. The spiciness kicked in instantly.
Street Style char grilled Corn with Queso (White Cheese), Chipotle Mayonnaise and Lime. The Chipotle which tasted similar to Paprika gave a unique fragrance and spice to the corn. The Corn was tasty with a strong Cheese flavor to it and was complemented by the Chipotle. Decent Corn but was lacking as the corn was not juicy.
Tostaditas de Cangrejo is Fried Tortilla with Crab meat, Avocado, Cucumber, Tamarind Mayonnaise & Red Chili. Tortilla was still crispy even with the toppings. Crab was refreshing and the chili gave a nice kick to it. de Carnitas is slow braised Pork Shoulder with Encurtidos (Pickle) & Jalapeno. This tasted bland. The Crab was better.
Tacos with Braised Veal Tongue & Ox Cheek, pickled Vegetable & Ghost Chili Mayonnaise. Tacos were decent. The Chili gave a nice kick to it but as a whole it tasted rather normal.
Quesadillas de Huitlacoche is Tortillas with Mexican Truffle, Mushrooms, Roasted Corn, Epazote (Mexican Herb) & Queso Fresco (White Cheese). I would say best dish of the night. Every bite was full of Mushroom flavors and the toppings complemented the Tortillas as well.
Tacos with Grilled fish, Lime, Achiote paste (Blend of Mexican Spices) & Red Onion Salsa. Fish was fresh and was perfectly grilled. The Achiote had a delicate and creamy taste to it. Overall it was rather bland when wrapped with the Tacos.
Salad to balance up the meals. Salad consisted of Quinoa, Corn, Spinach, Coriander, Chili & 'Pico de Gallo' (Salsa Fresca). Had a refreshing and delicate taste to it. Chili gave a nice kick to it. Quinoa made the dish rather bland though.
Now the mains. Chipotle-braised Goat with Roasted Sweet Corn Paste on the base and Fried Cassava (Yuca) as topping. Goat was soft and tender. Not sure how to describe it but it gave off a rather strong Goat essence which some might like it or not. Was expecting a big taste of explosion from the braised goat but the taste was rather delicate. Roasted Sweet Corn paste was decent with a slight sweetness to it which complemented the meat.
Mulato (Dried Mild Pepper) rubbed Pork Fillet with Walnut sauce, Pomegranate & Tequila soused Raisins. This dish was rather bland compared to the rest. Meat was tender. It had a delicate taste when dipped with the Walnut sauce.
Sparkling Grapefruit. Was rather tasteless. 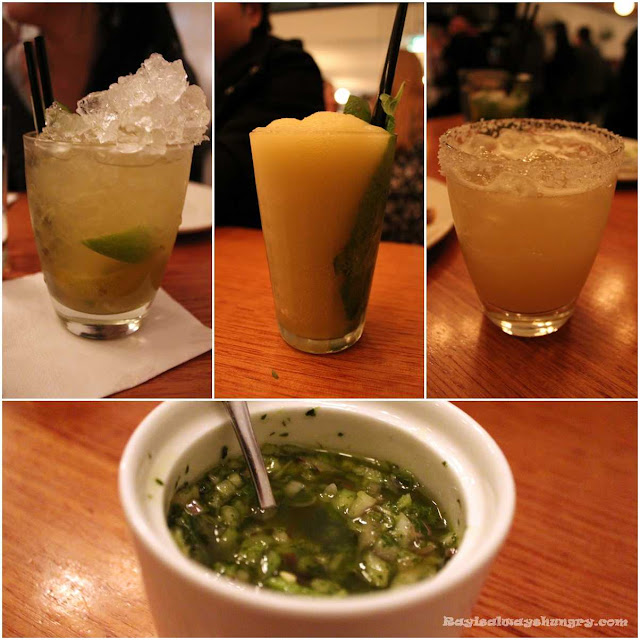 They have quite a number of cocktails. Cocktails were rather normal. Nothing special. The bottom picture was the Salsa given for the Tacos.
There were many tables which ordered this dessert so we decided to follow the crowd. Sweet Corn Ice Cream Cone with Caramelized Popcorn. The best dessert for the night. Caramelized Popcorn was pleasantly sweet. The Ice cream was decent with Sweet Corn flavor to it and the texture was how an ice cream should be.
Flan with Caramel and garnished with Mint Leaf. The texture was not smooth and tasted rather bland. Would not recommend this.
Apple Fritters topped with Vanilla Pear Sorbet. The Vanilla Pear Sorbet was icy but had no Pear flavor to it. The Apple Fritters were crispy but was slightly hard. The Tequila sauce didn't do any good to the dish. Decent but not great.


Verdict (Highest-10)
Food: 7.5 (The dishes didn't provide much of a burst of flavor but was rather delicate. Suitable for small eaters. Decent Mexican food.)
Service: 7 (Service was good. Staffs were friendly and attentive. They were good at explaining their menu.)
Ambiance: 6 (Didn't like the settings of the tables and the stools were rather uncomfortable.)
Overall: 7.5 (With the popularity and the long wait, I was expecting more. Maybe I set the bar too high but I got the same responds from my friends. Not sure what the hype was about with this restaurant.)
Price: $12-28 AUD per main
Address
CBD
Level 1
11 Collin Street
Melbourne 3000
Melbourne
Australia
Tel : (03) 9650 3821
Working Hours
Mon to Fri 12pm -11pm
Sat 6pm - 11pm

Raymond See
I love food. My dream would be to travel around the world and try all kinds of food and blog about it.